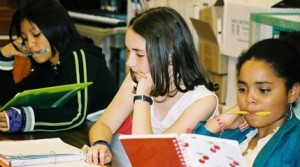 Large, mature oak and locust trees arched over the booths of the farmer’s market in Lincoln Park, Chicago. I tried to picture what these trees looked like when they were a hundred years younger. The gentle September sun brought out all the colors of oranges, apples, baby clothes, carriages and chatting mothers all arrayed on the bright green grass, and the still, blue sky brought people, grass, food, and trees together with the bricks, glass, concrete and cars of the city.

The earth meditated as I walked up North Clark Street past all these blessings toward the intellectual epicenter of an educational revolution still in progress—the Francis W. Parker School. I floated up the steps to the front door of an institution built on the idea that the blossoming of an individual character is at the core of education.

The movement that began here a century ago was thriving. 930 students and the adults responsible for them hummed through the hallways on their way to an all-school assembly that happens three times a week. 930 students, ages 4 through 18 and the adults who love them buzzed happily and calmly as they waited for the program to begin. Everyone was as comfortable with this stranger in their midst (me) as they were with each other. Each kid’s comfort was palpable, and the atmosphere breathed playful respect. 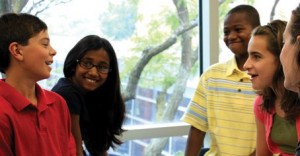 People with things to say to the community stood up and spoke to a thousand people the same way they would speak to several friends in the lunchroom. The teachers new to the school this year were introduced by a video of taped interviews. The video portrayed half-a-dozen unique, confident, fun-loving humans who were involved in doing something they loved, something traceable to learning. Most dramatic was that the video captured each one’s genius.

Well, “capture” is the wrong word, of course. A genius cannot be captured. Each portrait contained a glimpse of each teacher’s weirdness—some peculiar thing that is of no particular import in the business of running a school, but which obviously makes them them, and makes them loveable. The triumph of a community of people that serves the individuality of each person, whose very purpose is to bring out the glory in each person, should not need defense once you experience it. It seems superfluous even to ask, “Well, that’s all very well and good, but where do these kids go to college? What are their test scores?” That these students (as well as the adults who are being held accountable for their success) are all getting a great education every minute of every day is obvious. (I am confident that if one checked, one would discover a great record in the college admission department.) 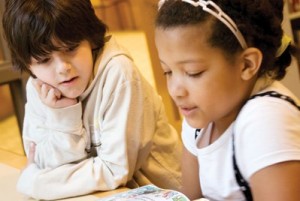 Education of character IS education. And it is wonderful to see that concept so eloquently expressed in a large thriving institution! The conviction that for schooling to be an education, teachers and students must attend to character has been on the table since ancient Greece. However, the idea that education might have something to do with “character” is marginal in our conversations. Francis Parker School demonstrates the reality that when education is understood as leading each character into the world to function effectively and gracefully within it, all other educational needs are included. Functioning gracefully and effectively in the world includes resilience, creativity and self-control. It includes the ability to sort through data, construct knowledge and learn how to express that knowledge in a way that is useful to others. Success in the world today requires knowing how to differ with someone and to make that difference a creative learning experience. To be educated a person needs collaboration skills. All these are best seen as disciplines of leading character out.

…And I do not believe that the privileged have any monopoly on character. I suffer from the fear that the average American visitor to Francis Parker School would be more impressed by how privileged all these people are than by the disciplined intellectual and communal infrastructure that created this beautiful powerhouse of education.

It seems Francis Parker and I share a vision that some day a critical mass of Americans will come to realize that this kind of education is not some mysterious privilege of the privileged, but the result of intentional and disciplined approach to bringing out the best in everyone regardless of what weirdness they bring to the table. (Photos from http://www.fwparker.org/)

In my euphoria I have singled out one school. But I visited 10 schools in the last three weeks. They are all successful, and they each in their own way subscribe to this notion that education both produces academics and transcends it, rather than the deadening notion that academics IS education. But I have also spent a great deal of my September in the blogosphere and am still puzzled by the confusion about what education is and how to get it. The idea that education can be joyful and fulfilling is foreign to so much of the conversation, and when it is present it is associated with privilege—and therefore, inaccessible to all children.

Why? Low parent involvement, not enough good teachers, not enough money, the unions, the bureaucracy, misguided government initiatives, a culture of poverty, and on and on. And when I bring up, “Well maybe we don’t have the right idea about education,” people say back, “Your idea only works for the privileged.” Well, I refuse to accept that.

Here is what Francis Parker wrote over a century ago: Fighting for four years in the Civil War, as best I could, for the preservation of the democratic ideal, a teacher of little children for nearly forty years, I believe four things: as I believe in God—that democracy is the one hope for the world; that democracy without efficient common (public) schools is impossible; that every school in the land should be made a home and a heaven for children; fourth, that when the ideal of the public school is realized, ‘the blood shed by the blessed martyrs for freedom will not have been shed in vain.’”

Well, thank you, Francis. I needed that. I have been following the echoes of your leadership, and it is wonderful, finally, to hear it directly. If we believe in democracy, shouldn’t we give children a lot of practice making decisions and making mistakes? Thank you Dan Frank, Principal. Please thank all your wonderful educators and students for me at your next available assembly. Bravo.

One thought on “Keeping Our Eyes on the Long Haul”