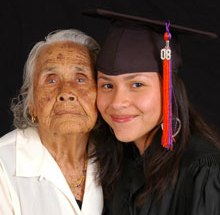 Exactly two weeks ago, I met Greg Lippman for a cup of coffee and a muffin at Peet’s at 1295 The Alameda in San Jose. Greg’s mission is to help low-achieving students become the first in their family to graduate from a four-year college. Having already helped to launch one charter school which is now achieving this mission, his latest project is to create and sustain five new charter schools in Santa Clara county, and there is no doubt in my mind that his vision will become a reality. He has the toolbox. In telling me about his new mission Greg said, “I am teaching the parents to talk bossy, the way private school parents do.”

Since private school parents I have known don’t so much talk bossy as talk entitled, I said, “You mean you are getting them to talk entitled?”

“Yes. Exactly so,” he replied.

As more and more people are watching and talking about “Waiting for Superman,” and deciding not to wait for anyone, but just to make a difference where they can, it is important to learn from those who have already been successful at making schools successful. One lesson is to continue to distinguish between ends and means.

If our goal is to make all kids successful academically, pounding away at the blackboard and sticking test booklets under kids noses might not be our best methods. To do any job right one needs a good tool box and I am grateful to Greg for giving me a new tool: “Start talking entitled.” It’s a good one, especially if it would surprise others to hear you sound like that.

Also, in the last couple of weeks using the word “entitled” pushes buttons. Entitled behavior, especially on the part of parents for their children is so obviously destructive, that to praise the use of the word in any context causes almost violent reactions. So many teachers and principals have suffered from the onslaught of entitled parents.

One friend pointed out to me recently that empowerment is only a start. There is a whole box of tools that people of all SES need to use. She writes: “Many parents are not doing their part as parents.  I applaud efforts to teach parents the intricacies of 1) involved parenting, 2) understanding the teacher’s responsibilities, 3) offering suggestions for shared responsibility, and 4) utilizing resources to make the best possible outcome for their children.  With power comes responsibility.  I think we do in fact need to retrain parents not only to talk bossy, but also to act like a good boss—to understand and appreciate their surroundings and how they can impact them positively. It breaks my heart to see parents who feel entitled to having cheap babysitting for their kids.  Many of those whose children need the most assistance do not want to be bothered to even be entitled/empowered.”

But parents aren’t the only people who feel and act entitled. There is a lot of what might be called “silent entitlement” that hides in the institutions, administrations and bureaucracies that govern the lives of our children. There is also a tyranny-of-the-majority which has to be addressed, and Greg Lippman is giving those who feel powerless a great tool for addressing these kinds of entitlements: “Start talking entitled.”