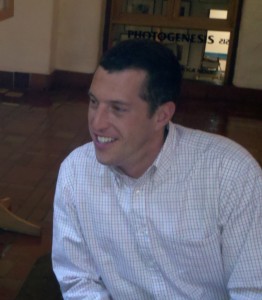 After returning from a stint in Japan teaching English ten years ago, Paul Greenwood found himself walking on Ocean Beach in San Francisco looking for inspiration as he pondered what to do with the rest of his life. Suddenly, feeling something on his right thigh he looked down to see a Jack Russell Terrier looking up at him. Having loved dogs since he was a child, Paul bent down to stroke his head, and turned to look for an owner. Sure enough he saw a woman walking toward him.

“He likes you,” the woman said with a smile.

“Herschel. I am Shirley Freeman. What’s your name?”

It turned out that Shirley Freeman ran a k-8 school in San Francisco. When she told him that she was looking for a seventh grade teacher, he found himself smiling without knowing exactly why. Several conversations later, Shirley offered him the job, and he took it.

Today, Paul is the Head of the Creative Arts Charter School in San Francisco. Today, his anxiety is not about what he will do with his life or why, but how he can maximize his energy and passion to inspire the people he serves to see in themselves infinite possibility. He is clear that his mission is to create a learning community, to empower the teachers and students in his care to create meaning through learning, and learning through meaning, in order to make of themselves that which they wish to become.

Paul says he always feels a bit funny attributing a watershed moment in his life to a dog.  Yet he readily acknowledges that Herschel was the vector for that ineffable something that bought him into the relationship that helped him discover his way in the world. Indeed, there is nothing funny about it; in fact it is one of the sanest and most serious things humans do. It is part of our search for meaning.

Western culture calls such phenomena “para” because our science has no sound explanation for them. But throughout human history these phenomena continue to occur. Carl Jung called it synchronicity: finding meaning in coincidence.

Since one of the essential challenges of life is to find it meaningful, listening to the meaning you attach to events is a way of trusting yourself. Noticing synchronous moments is a part of developing a relationship with your genius. Listening to the teacher within is more of an art than a science, but the more we practice, the easier it is to see the signs and discern our next move.

For Paul, that moment on the beach was a signpost. To brush it off as mere coincidence would actually be fundamentally irrational. Besides, it would be no fun at all.

7 thoughts on “Listen to Your Genius”