The Tibetan Fair, one of the great musical/cultural/spiritual events of the year, was just starting up on a beautiful spring day at Live Oak Park in Berkeley, California. As Matt approached he could feel the rhythms reshaping him.

His pace slowed, and he finally stopped ten feet from the Tibetan welcome table piled high with flags, goods, clothing and literature. He just listened and let the music transport him. 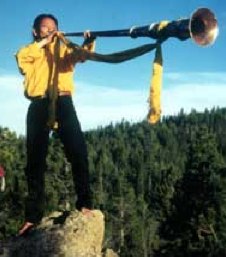 A ten-year-old boy sat behind the table trying to play a Tibetan long horn. His face was alive with concentration as he tried to harmonize its sound with the music that filled the air. Each note he played was too low, but each try brought him closer to the harmony he sought.

A tall, white-haired man, who had been moving through the park as if he were in charge of the event, approached the table, came up to the boy and said: “Cut that out. Quit it.”

The boy stopped, and his face went blank. “Ah, the father,” said Matt to himself.

A boy has usually not yet been initiated into the realm of adult activity by the age of 10, but a child’s attempt to belong in the ensemble should be noticed, appreciated and rewarded, not punished. The urge in a child to make a difference is as natural and powerful as the need to love. To make a difference is to be valuable, and (contrary to common cultural assumptions) children naturally want to help as a way of being valued members of a community. To deprive them of the practice of making a difference is a form of mistreatment.

Matt couldn’t let this offense to the child go. He hung around the table for a while, and as he started to walk away, the family dog, who had been lying under the table got up and followed him. The father followed the dog, and as Matt bent over to scratch the dog behind the ears, the two men started making small talk about the fair.

After a few minutes, Matt saw his chance. “I was watching your son play the Tibetan longhorn,” he said. “He has musical talent. I think it was a mistake to shut him down like that. His efforts should be encouraged and rewarded.”

A little surprised, the man said with some embarrassment, “Thank you. You are right. I felt bad doing that. I will give you a dollar to go and tell him.”

“I would, of course, but I think it is for you to do. You are his father, right?”

“I was focusing on the fair, you know. I am in charge and the noise got on my nerves,” he replied.

“I know. All the more reason that you are the one he needs to hear from. He doesn’t need praise for his talent, he needs to know he belongs and that his efforts to be a part of the this wonderful fair are respected and valued.”

The father returned to the table and told the child he was sorry for stopping him and asked him to keep playing. The dog went back under the table.

The secret to building a strong self is making a difference to others. As parents in a kitchen, or as teachers in a kindergarten, the secret to bringing out the best in children is to see their play as work, and to give them real work to do.

2 thoughts on “How Parents can Educate Genius or Not”