After reading “Turning Power Struggles into Emotional Intelligence” Lyn decided to try the approach and told me this story about her two-year-old daughter Uma:

Was it some kind of magic? All I can say is, I hope it works next time Uma and I have a difference about what we are doing and how we are doing it.

There aren’t many magic wands in this business, but there are, indeed, disciplines that actually work, and this is one of them. 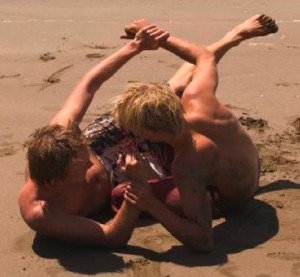 Marion, a kindergarten teacher, told me about Damian, who at the age of five-and-a-half seemed to be a gang leader. For a certain group of boys the playground was a place to fight and, since there was a rule against fighting, they kept getting into trouble. The teachers felt they were “out of control,” and to Marion it was obvious that Damian was the dominant male and the ring leader.

“I am awfully glad I didn’t have this class when I first started teaching,” she said. “I don’t think I would have stayed in teaching. They are really hard. They can’t keep their hands off each other. They fight every chance they get. Damian, in particular has such bad impulse control. I talk to him; he understands, says he won’t do it again, and boom, does it again. His mother is even more frustrated than we are. We are working together, but nothing is working.”

I told her about Musa and Ruben in “Don’t Get Mad; Get Creative,” and I suggested she find a moment when he is not misbehaving and say: “Damian, You are kind of a warrior aren’t you?” in a neutral loving voice and see what happens.

Two days later Marion reported that she had found a chance to chat with Damian when no one else was around, and in the conversation, she smiled at him and said: “You are kind of a warrior aren’t you?”

Damian beamed back: “Yes!” as if finally someone understood him.

There was no change on the playground that day, but Marion called Damian’s Mom, Shivan and asked her to come in an hour early when she came for pick-up at the end of the day, which she did.

They had a long talk in which Shivan intensely repeated her position that violence was bad. Further into the conversation she said that she was afraid that Damian would turn out to be a troublemaker like his father had been when he was in school.

“Do you think Damian knows your values?” Marion asked.

“I certainly hope so! We tell him at least once a day.”

“Well, your first move is to stop. Know that by now he is hard-wired with your values. He has been spending the last 1,800 days of his life incorporating them into his brain.”

“I know. But that is not because he doesn’t know them. He has been trying to figure out how to apply them to his situation—the person he is and the environment he is in.”

“But the school is against violence, isn’t it?”

“Of course.” Then Marion told her about her conversation with Damian that morning. “What we need to do,” she said, “is 1) Notice who he is. 2) Try to see the world through his eyes. 3) Reflect our observations back to him and 4) Help him with his project: how to be himself and live his parents’ values and make something good of himself in the world.”
The conversation lasted an hour, but this was the essence of it.

And to make a longer story shorter, by the end of the year the gang had mellowed into a group of friends who branched out to other kids in the class (including girls) and Damian was showing himself as the kind of leader we will all be proud of some day. They were still rambunctious, but they stayed within the rules and were generally socially responsible.

Contrary to how it sometimes feels, children’s natural tendency is to be the way we want them to be. Sometimes their lives get a little convoluted, because they are also—and most fundamentally—going about their business of trying to make something of themselves in the world.