The most important thing we can do to ensure that our children speak mathematics when they are older is to make sure that mathematics is part of their world during their first 10 years of life.

At birth a human is given 100 billion neurons to play with each already connected to about 2500 other neurons. The baby then spends the next few years deciding which neurons to get rid of and which to keep, connecting the keepers with other neurons—up to as many as 15,000 connections per neuron. They do this with no special training or college degree.

Just as the brain of a child raised in Tokyo will save a different set of neurons from a child raised in New York as they map the sounds of the Japanese language into their neural network, so a child raised in an environment heavy in numbers and inquisitiveness will have the nerves to be at home in a world of math and science. 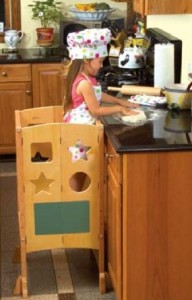 If you want your children to be literate, use a lot of words. If you want them to be numerate, fill their world with numbers.

Here is a starter list of some specific things parents can do this summer:

If this kind of behavior sounds socially deviant to your ears, get over it, …and heck, why not do this kind of thing all year long?

One carpool parent counted cars on the way to school. Starting a year ago looking for PT Cruisers, the three kids evolved a complicated point system for each kind of car: Mini Coopers and PT Cruisers, are half a point; a bug is one point; smart cars and police cars, 2; a Prius is 5 points. Smart car convertible? Game over. You win. It is still a matter of some debate whether parked cars count. Sometimes they count colors looking to collect the whole rainbow: red, orange, yellow, green, blue, violet. (Indigo is currently under debate.) The most amazing thing is that all three children keep track of all three scores with the greatest of ease as all those numbers keep changing. (Motivation and self-determination make a big difference don’t they?)

Another family started collecting pennies in a glass jar. Everyone put pennies into the jar, and from time to time estimating how many pennies, checking the estimate by counting, wondering how much they could buy with what they had. When they saw something they wanted in the store, they made a note and compared with what they had in the jar. When that got discouraging, they decided to include all coins. (The six-year-old noted that a dime has the power of 10 pennies but took up less space.) They started keeping a journal. This led to giving every child an allowance and then to taking responsibility for getting the income they needed for the expenses they wanted.

Invent your own with an eye to their interests. Creativity is inherently fun. 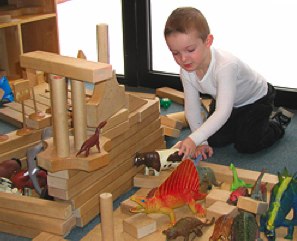 How well they do at any of these activities doesn’t matter. What matters is making mathematics and curiosity about the physical world a conscious part of children’s lives. A home devoid of numbers will have the same impact on school-math as a home devoid of words will have on reading and writing.

In the farmer’s market last week I saw a boy of no more than eight minding the mushroom table.  He knew exactly how much everything cost, and counted out the change with no apparent effort.  His mother (who usually tends the table) was off doing something else, and not even there to coach him.

Most children will find elementary school math cinchy if their brains saved the right neurons when they were little. Making sure mathematics is not a foreign language can be simple and fun—simply speak math at home.

14 thoughts on “Summer Fun: 12 Ways Parents Can Build a Mathematics Brain in Children”