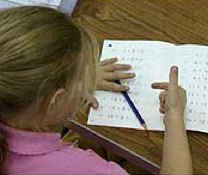 He said, “All other schools go like this (his hands formed a pyramid); this school goes like this.” (The fingers of his hands spread up and out in all directions like a plant, or tree, or coral reef).

The best news is that although ingrained in our minds like bad habits, these myths vanish in the face of a little conversation between parents and teachers about children in the absence of fear. A little reminding and people can usually refocus on what matters.

No, it’s not. The place: “I have arrived” is a mirage. Living is growing. For learners there is more and more opportunity as we get older, not less and less. It’s best to focus children on pursuing their calling, developing their character, building a self, making a difference. Put learning first and achievement will follow anon.

2. Academic achievement is the ticket to the top. (test scores/brand name colleges)

3. It is all about ability, and there are 3 kinds of kids: gifted, normal and those who learn differently.

We know that is not true. We each learn differently, have a unique set of gifts and talents, and none of us is “normal.” Ability is something we can develop depending upon what we commit to do and practice. Encourage a growth mindset in kids. (If you practice you’ll get smarter. That is what the research shows.) Be great not excellent. Don’t compare yourself with others. “Best” distracts us from being great because it allows the notion of comparison to creep in. Don’t label.

4. The race starts in kindergarten with kids at ZERO.

Not at all. By the time they walk into their first kindergarten classroom and are asked to sit in a circle, children have already been researchers, scientists, detectives and problem-solvers for over 43,000 hours. Treat them as if they already know a lot and are passionate about learning more.

5. You can get a head start by starting the race early: preschool, birth, pre-natal.

It’s true that early environment has a powerful effect on brain development, but getting an early start on academics can actually hurt. Don’t start the race early. Raising your child in a complex environment builds a more complex brain, but seeing it as race and comparing your child with others to see how ahead or behind they are, weakens them. Even in a race, looking over your shoulder slows you down.

6. Parents have the power to get their kids to turn out the way they want them to.

Parents have influence. But children come into the world as their own people, and our job is to help them be that person more effectively and gracefully. A child is not some sort of project in which we can control the outcome. A parent’s power is limited. The 3 ways we can have a positive effect is 1) treat them as decision makers 2) clarify and defend boundaries, 3) provide unconditional love. Love ‘em and tell ‘em the truth.

No. As with parents, when schools try to shape children, they come out misshapen. Education is leading a person’s character out into the world to function effectively, creatively and gracefully within it. Drop “getting ahead” or “being behind.” Help each child learn the skills they need to master real challenges.

Wrong. Schools tend to push kids to master certain skills on a fixed (and arbitrary) timetable, and bore or intimidate them along the way. This process often makes kids decide they are stupid in certain subjects (if it doesn’t make them hate school altogether). Also, holding to the timetable makes kids move on to the next thing before they have mastered the last thing, which increases their frustration and makes them think they don’t like the subject.

However, when taught in ways that are engaging, fun and meaningful by teachers who put the learning of each individual child first, academic skills are just as likable as those of other disciplines like: design, athletics, building, collaboration, music, conflict resolution, theatre, spiritual growth. The key elements in likability are: human connection, internal motivation, practice and mastery. Kids naturally love challenge and mastery. Teachers, parents and schools need to be patient, and give them the time to learn and master. Under these conditions they learn more, faster.

9. You have to sacrifice your imagination, your inquisitiveness and your self to get through the eye of the needle to the next level of academic achievement.

On the contrary, imagination, inquisitiveness, integrity, grit, enthusiasm, inspiration, practice, perseverance, courage, etc. are the key disciplines of development of character and also the key elements of academic success. Fulfillment of self and mastering academic standards go hand in hand.

10. High on the pyramid has something to do with happiness.

This myth not only sets people up for failure, but also for unhappiness. Research on happiness shows that there is no correlation between position on the pyramid and happiness. Connection to Others, Work that you Love, Loving to Learn. This is success. One more thing: Loving a challenge. The ability to learn from disappointment, failure, loss, mistakes, conflict, newness, etc. all make for a good life. Pain is a necessary ingredient of all lives regardless of how “high” you are on the mythical pyramid.

These myths will die as more and more schools embrace the new era. My agony is that meanwhile our society is breaking in two. Millions of people are getting an education, but tens of millions are not, and many of those without parental or community support are being cast onto the discard pile of our rapidly changing world.

I dream that one day the conversation between parents and teachers will liberate us from the myths of an archaic culture, and refocus the culture of our schools—all our schools—to be congruent with the emerging global culture.

Impossible dream? Well, isn’t that what a March on Washington is for?

15 thoughts on “This March on Washington, Where’s the Dream?”