Ever since I was seven, when my father compromised his stand on the new technology, by allowing a television in our house, there has been a running dialog in this country about the evils of new media. As in my father’s original stance, 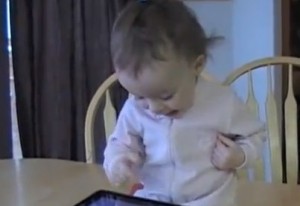 the central question of the conversation is usually about exposure. How much, if any, exposure should parents allow their children?

Tuesday’s publishing of new research from Common Sense Media about media use by American children ages zero to eight has caused the latest spate of controversy. Let’s take this energy and refocus it from what exposure we parents should be allowing our children to what all educators–parents and teachers alike–should be doing with our children.

To do that properly we must be reminded of the essential nature of the child. Children are hypothesis testors. When the alarm is sounded, let’s return to the question of whether or not we are treating children as budding researchers, investigators, detectives and anthropologists. Are we assisting them in the optimal development of the architecture of their brains, or are we acting as if we can shape their brains?

For instance, we can view this video of a child with a magazine

and say that his OS has been distorted by Steve Jobs or we can see this child doing what children always do with everything: forming hypotheses and then testing them in a variety of situations in the never-ending search for how the environment works and how they can make it work. This is a marvelous video of the human operating system at work as it compares a magazine to an iPAD. Steven Jobs didn’t change this child’s operating system; he simply invented a new toy.

Yes, it does alarm me that 47 percent of children eight and under have TV’s in their rooms. These are definitely not good decisions. However, when you consider how many bad decisions are made in the education of children, this one pales by comparison. Flash cards in the bathtub, testing them on academics before the third grade, treating them as passive learners rather than giving them opportunities to create, are far more damaging. These common practices and thousands more like them constitute malpractice and are pervasive.

Yes, a part of our job is to make decisions about what to expose our children to, but the vast majority of our energy should go into how we connect with them. From the lessons teachers design for them at school to the way parents converse with them at the dinner table, getting ready for school, driving in the car, welcoming friends to the home, the quality of this connection is most critical.

The web of relationships children grow up in is determinative; the toys they play with are not. Do we treat them as decision makers? Do we tell them the truth? Do we give them accurate feedback? Do we not let their mistakes and our conflicts compromise our love for them?

Let’s look again at the child in this video to remind ourselves that we have budding scientists on our hands, and let our respect for them reveal itself in treating them as if they know what they are doing.

7 thoughts on “New Media Are Neither Good Nor Bad. It’s Parenting Makes It So.”