A Discipline of My Calling

“I don’t mean to be disrespectful but I wonder where you have been lately with all the pressure on all the…” were the words that greeted me from my computer screen this morning, when I opened it up at 5am for my customary morning of writing. Someone I don’t yet know had commented on my blog post entitled: “In Education Failure IS an Option.”

Saying to myself, “This is one of those times to apply the discipline Act. Don’t react,” I went to put on the kettle.

As I was spooning coffee grounds into the filter (being careful not to watch the pot) a conversation I had had many years ago with my 13-year-old son came to mind. He had taken to beginning sentences with “Dad, no offense, but….”

One evening as we were sitting down to dinner, he started again with: “No offense, Dad, but…”

Putting my hands up into the standard T for Time Out did cause him to pause just long enough for me to say with a smile on my face, “Peter, you know (right?) that whenever you start a sentence with ‘No offense,’ you immediately cause offense. The other person knows instantly that you are about to say something offensive, so he is then readying his defenses, rather than opening to the useful feedback you are about to give him.”

Our eyes locked onto each other. “No, really, I don’t want you to take offense. That’s why I said it.”

“I know that’s true, which is why I said what I said. If you don’t want to offend me, show that you respect my ability to receive negative feedback constructively. You can just go ahead and tell me what you want to tell me, and it won’t hurt our relationship. I promise.”

Becoming head of school at the age of 29 made me one of those lucky people who, early on, find a way of making a living doing work that they love. I kept telling people, “I feel like a fish that’s just been thrown into the right river.” And so it was for the next 36 years.

Headmastering was my calling not because it was easy for me, or “played to my strengths,” but because I loved it. I loved helping other people get what they want, and therefore, that is what the job became for me. I discovered the law of mutuality and realized that a head’s three-page job description boils down to one thing: That person on the other side of the table from me? That person is the only person who matters right now. 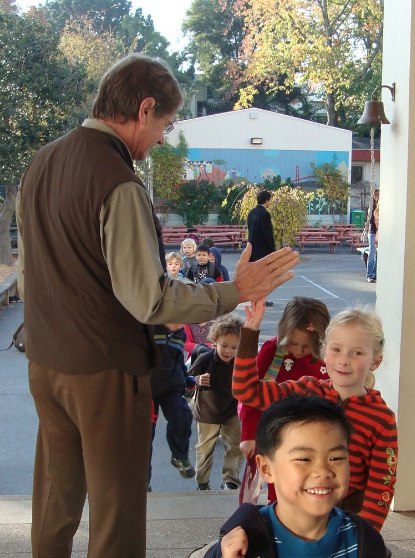 Thus, I learned that the core dictate of my character was to help others be their character and that my calling was the pursuit of calling. This mission was tricky enough to keep me challenged for a lifetime—well, not quite a lifetime, as it turned out.

For on July 1, 2010, I found myself walking down the streets of San Francisco at dawn to begin my new life at the only cafe open at that hour. I bounced merrily along, freed from the responsibilities of being a head, but I was bouncing on the swells of a sea of anxiety whose depths I didn’t even want to know.

Coming the other way on Polk Street was a woman looking down at her cell phone.

She didn’t even look up.

Just as she passed me, however, she stopped and said, “I’m sorry. Good morning.”

I smiled back at her, and said, “Thank you.”

This event on our respective journeys took all of five seconds.

As I walked on I noticed that my “Thank you” was intended both as courtesy and also as education. I automatically wanted her to get positive reinforcement for being aware of others.

“OMG. I am still teaching!” I said to myself.

A voice added: I guess now you are headmaster of everyone.

“Ridiculous,” I said back, as I picked up a beer can from the sidewalk and dumped it in the recycling bin on the corner.

It seems my former work is like a phantom limb. One school year later, although my community has shifted from 95% face-to-face to 95% virtual, I still experience a person as an asset and a piece of litter as a blemish, and all are still part of me.

You are walking down a sidewalk to a café.

I guess, only the roles have changed.

Right now there is person on the other side of a virtual table from me telling me that he intends no disrespect. When I reply, I will do what I have always done: see if I can dope out who he is, where he is going, and how I can help him along the way.