Dominique, age 8, sat in front of a computer screen doing addition problems—level one on Khan Academy.

When 9 + 3 = ? appeared on the screen, “That’s easy,” she said, and started hunting for 1 on the keyboard. She was new to the computer, and it was slower than she was. Nonetheless her approach was determined and persistent. She found the 1, hit it with her forefinger, found 2 next to it, hit that, moved the curser to the green “Check answer” button and clicked. For her efforts she got a smiley face. A bright bar of royal blue appeared in the success bar just above the answer box, and Dominique smiled. She noticed that “Check answer” had turned into “Correct! Next Question” and immediately clicked for the next question, which popped onto the screen: 4 + 9 = ?. 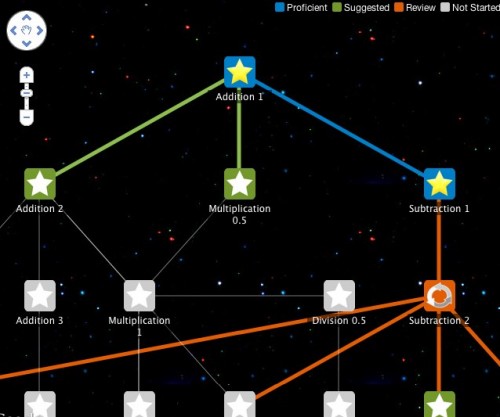 With the same unselfconsciousness of a baby testing things by putting them in her mouth, she put up four fingers, and with an intense look on her face counted nine, found 9 on the keyboard, clicked the answer key, the little yellow circle below frowned, and the bright blue color in the bar above vanished. A puzzled look came onto her face.

Undaunted, she looked at her fingers, realized she had recounted the first four fingers, smiled a big smile as she said “Thirteen,” found the numbers on the keyboard and 13 appeared in the answer box. When she clicked the “check answer” button, the emoticon smiled back and the first part of the success bar turned blue again. Dominique went on to 8 + 5 = ? without hesitation.

Shortly before the end of my forty-five minutes with her, the success bar was filled with a rainbow of color and a message read: “You are ready to move on! You are proficient in this topic. Choose a new exercise to earn more points, or you can do more problems to increase your streak.” With no trouble reading this, Dominique scanned the four options and chose “addition 2.” As I watched her struggle with double-digit addition, I realized she had reached a point where some help from me might be useful, but it was time for me to get her back to class.

Even though Dominique was new to Khan Academy, even though the computer is slow to give her feedback, even though she was only on level one, and a problem sometimes took her three minutes, this was and is her favorite thing to do with me—second only to eating pizza.

I had met Dominique’s report card before I met Dominique—straight F’s. When I did meet her, she came with a stack of worksheets that “she needed help with.” The first problem on the top of the paper was 78 – 49 =________.  In the blank in pencil was 31 with a red X next to it. The whole paper was like this: a full page of double digit  subtraction problems with wrong answers penciled in the blanks and red X’s next to them.

There are at least six important differences between the standard, measuring-up delivery system (a system with McDonalds-quality standardization across the country) and Khan Academy:

1)    The student gets to bring the challenges on herself.

3)    She is not allowed to move to the next level until she has gotten ten in a row correct.

5)    A student can see where she is going (Dominique was highly motivated when she could see her way all the way to what the high schoolers are doing.) 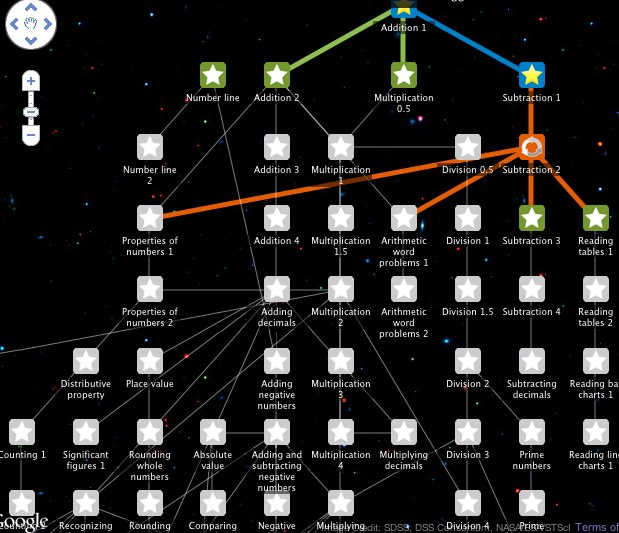 6)    A student  (therefore) moves from mastery to mastery and does not accumulate a sheaf of documents of her failure nor a summary judgment of F.

Beyond these six differences, there may be a meta-reason why Dominique loves Khan Academy despite three years of learning that she is no good at math. Maybe the difference between Khan Academy and worksheets is that Dominique is choosing Khan Academy, whereas worksheets are being done to her.

Whatever the reason, Khan Academy reveals a person dying to succeed, and I rejoice that three years of failure at school-delivered arithmetic has not killed her enthusiasm for learning mathematics.  The natural resilience of young children is remarkable.

3 thoughts on “The Natural Resilience of Children”