In the summer of 1974 I became principal of my first school. It was in trouble—such trouble, in fact, that I was the only person they could find to be its principal.

Demographic change had hit the school hard. White flight and other changes had dropped the enrollment to only 210 students, 38% of whom were now African American. The neighborhood of the school was what the real estate agents charmingly called “a little salt and pepper,” and everyone believed what one trustee whispered in my ear: “Research has shown that if a third of a school goes black, it goes all the way.”

To make many long stories short, three years later it was a vibrant, happy school for boys and girls ages 2 to 14, and soon it was the “hot” school with a full enrollment of 330, sending its students on to the best high schools well prepared. Still 38% were African American with economic diversity funded by a sliding scale tuition.

What did we do right?

Our secret sauce was that the teachers and I were on a mission, a mission to prove that three popular beliefs were wrong: (1) As diversity goes up, test scores go down. (2) People behave best when they are forced to. (3) Progressive education is soft on “the basics.”

In making this attempt we learned a great deal about what works and what doesn’t, and we learned to be more competent humans. Most of all we did disprove these popular beliefs and in their place established three educationally sound principles.

2) Children will behave better if we teach them to be good decision makers rather than if we “teach them morality.” 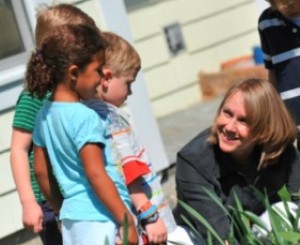 3) You don’t make people more effective and powerful by making them sit quietly and doing things to them, but rather by triggering some internal motive and engaging them as co-decision makers in what humans naturally love: learning and making something of themselves.

A fourth learning of mine is that old beliefs die hard. Even though most people would rather believe in these three principles, most people needed to be shown—usually one person, one lesson at a time. For instance, one day in 1976 a couple came into my office and the first words out of the father’s mouth was: “Johnny needs structure.”

I could practically see the bubble over his head: desks in straight rows with potentially recalcitrant boys being made to follow directions.

“Right,” I replied. “All children need structure. Let’s go around the school and look at the various structures we use here and then sit down and talk about whether any of these structures will be right for Johnny.”

After a 45 minute tour of the classrooms where they saw kids working in centers, students at small groups solving problems together without adult supervision, children under desks reading, and children on the floor learning on their own, we returned to my office.

“Did you see structure that would work for Johnny?”

“This is fabulous,” said one. “We want Johnny to go here,” said the other.

In the next thirty-five years I learned a lot and deepened my understanding of these three educational principles. I also have mountains of evidence for those who still need it that diversity, individual decision making and internal motivation are essential for optimizing academic achievement. Furthermore, I have discovered many other schools on the same mission. There has been a proliferation of great learning communities across the country, and many stand as beacons of best practices. This work has also been bolstered by plenty of research on how kids learn, how to motivate people, how the brain works, and how to build a strong learning organization.

Nonetheless, today, even though most parents and teachers I talk to embrace the three principles, it seems everyone still needs reminding.

Or perhaps it’s more than that. Old habits supported by entrenched systems and undergirded by fear make behaving differently difficult. Making schools better is local activity. Individuals in schools need to give each other what we should all give the kids: the time and space to take risks, ask questions, make mistakes, build community and practice leadership.

5 thoughts on “Making Better Schools is a Local Enterprise”