Ah, those smooth, splinter-free blocks of maple! Just reading about them in the New York Times last Sunday connected me to my childhood like almost nothing else could. I spent hours on the floor with them on into my early teens when sports, girls and boarding school finally tore me away from them. I built and built and built, designing and redesigning as I went, learning the relationships among quantities and the various ways shapes could go together…or not. I learned about stability and instability, cantilevers and gravity, and so much more. In fact, I am mostly unaware of the wonderful things it did for my brain-architecture. I do know now, what I didn’t know then, that millions of messages were ping-ponging all over the inside of my cranium as I got an idea, set a goal, found it impossible, and then tried something else. “Playing with blocks” was a matter of using many parts of my brain to solve problem after problem.

I had no trouble with mathematics growing up, and I attribute my facility mostly to this wonderful toy. The basic block is a 5.5-inch-long rectangle with a width of 2.75 inches and a depth half of that. There was a 2.75 x 2.75 square block we called a “Half” and an 11-inch-long rectangle we called a “Double.” In fifth grade, therefore, when we were told that to multiply fractions one multiplies the numerators and the denominators and then reduce the resulting fraction, it all made perfect sense to me. I had known since I was five that four halves equal a double. 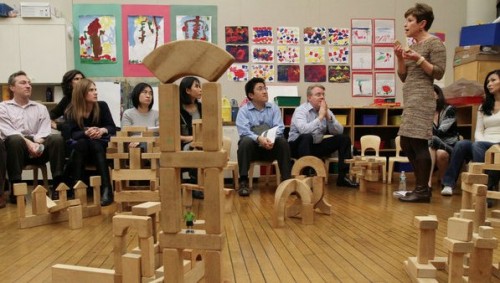 Knowing blocks still exist in schools and are making a comeback gives me joy. Thank God for Caroline Pratt who invented them in 1914. My schools always featured them in classrooms up through second grade. In September of my first year at my second school, during a visit to Fern Stampleman’s second grade classroom I made the off-hand remark, “You have a lot of blocks.”

This casual, not-so-innocent comment resulted in a conversation in my office that afternoon. She came in and very calmly but passionately treated me to a long discourse on the educational value of blocks.

When she was finished, I said, “I know,” with a big smile on my face, to which she replied, “Oh.” With that we began the best of collegial friendships.

In my last school when we eliminated one of our four preschool classes, we ended up with an extra set of these wonderful blocks. All three preschool classes and both kindergartens had all the blocks they needed and had no room for more. I couldn’t interest our then first and second grade teachers in them. (There is no point in forcing them on teachers who don’t want them and don’t know how to use them.)

Nevertheless, I refused to let them go, put them in storage, and when we were looking for a second grade teacher the next year, “How do you use blocks in your classroom?” was an interview question. We didn’t hire someone until we heard a good answer. It turns out that it is an excellent question if you are looking for an elementary teacher; we found a great one. I was pleased to have also saved about $1500 by hanging on to the blocks.

11 thoughts on “How Do You Use Blocks? An Excellent Interview Question When Hiring an Elementary School Teacher”