My one-year-old grandson, Musa, is fast. No, I mean very fast. He can be safe on the sofa and in the time it takes me to get up and take a book off the shelf, he can be waving a poker from the fireplace in all directions.

One can easily foresee the onset of the “terrible two’s,” where all his relationships are defined by a continual string of “No’s” and a battle of wills. But on my last visit with Musa before I returned to the Midwest, I got a clear picture of how it doesn’t have to be that way.
I met him, his mother Lizzie and his older brother Abdallah at Ardenwood Historic Farm in California. (Gulp. Chickens, manure, and tools, oh my—two hours in Don’t Touch City with a 16-month-old.)

Immediately after I put him down from his hello hug, he picked up a three-foot stick at his feet, waved it around, and then offered it to me.

“Thank you,” I said, as I took it, used it as a cane and gave it back to him with a big smile. He poked the dirt with it a few times, and when Lizzie said, “Come on. Let’s go see the goats” and started walking, he played with it where he was until we were thirty yards away.

By the time he caught up Abdallah was feeding the goats through the mesh of a fence. Musa picked up a leaf and cautiously poked it through to the goat whose mouth greedily took it. Life is admittedly easier when one has an older brother to show you how things are done—less trial and error is necessary—just copy. 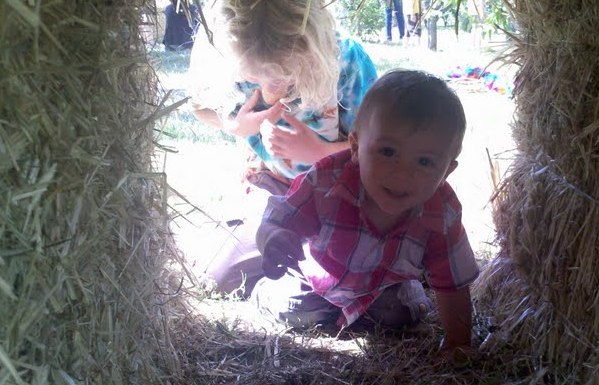 More wandering took us to the tractor shed where a rope looping from post to post separated us from 100 years of farm equipment. All technology requires investigation; so Musa was inside in the time it takes a humming bird to go from one flower to the next.

But Lizzie is experienced. She reached over the rope, put him on the correct side, and said: “This rope is a boundary. Do not cross it.” For the rest of our ten-minute exploration of tractors, Musa stayed on his side of the rope, pointing and saying “Oouushsh.” (Musa has a two-word vocabulary. The other is “ersch.” His mother and father are still trying to translate, but both words seem to mean everything from “Look” to “I want that” to “Tell me about that.”)

A generation ago as a father I learned early to see small children as researchers rather than bestial creatures needing to be trained, and that understanding has helped me in my work as an educator. These days there is a wealth of brain research to back it up. Google “children are scientists” and see. Here’s a tidbit from Alison Gopnik’s “How Babies Think:

…children learn about the world in much the same way that scientists do—by conducting experiments, analyzing statistics, and forming intuitive theories of the physical, biological, [sociological] and psychological realms.

If Musa could talk he would say: “Look you guys there are millions of objects and thousands of processes I have to understand. I need your help. You can teach me short-cuts and boundaries so that I don’t have to learn the hard way. You can give me work that is more interesting than I could choose for myself. That’s great, but there is no substitute for my experimental method. It is my job to figure things out. You see, if I don’t engage in the scientific method now, it will be hard for me to learn it later. And how will I build a brain that others can rely on if I only rely on what authority people say?

“I certainly want us to enjoy our time together; so go ahead and say “No,” or suggest a different activity, or show me how, but don’t get mad at me for testing. It’s my job. I appreciate anything that helps me build my brain into an organ that will stand the test of perpetual newness.”

Two-year-olds are determined to become autonomous decision-makers. They come by their willfulness honestly; it is necessary for their survival, and they know it deep in the very wiring and chemistry of their being.

Furthermore, early childhood educators take note, before you interrupt what a child is doing be sure you have something better to offer. It is usually better to join a child in his investigation than to abort it and replace it with an idea of your own.