One day second grader Miranda said: “I was in the garden looking at the tomatoes with Patrice and Josh, and we saw a wasp tackling a fly.  Then it tore the fly’s head off and flew away with the body.  An ant found the head and started eating it and the fly’s eyes separated from its head.”

The teacher asked, “What did you think about when you were watching this happen?”

She replied, “I thought, this is a once-in-a-lifetime experience, and I wouldn’t want to be that fly.”

Later that same afternoon Sasha and Kate joined in the insect hunt and Kate said, “The garden seems to be so calm when you first look at it but when you look closer it’s very alive.”

On another day first graders found the front half of a dead snake and immediately started generating hypotheses as to what happened:

“Maybe a chicken ate it.”

“Maybe a sheep stepped on it?”

Why do we teach science? Is it because there is a set of things that all children should know by the time they are 18? Is it because we want them to learn certain disciplined ways of approaching a problem? Is it because connecting with nature at a young age is critical to developing empathy for the planet we live on?

The answer is obviously: “e) All of the above and so much more.” My favorite—because it is inclusive of all the others—is d) because kids are human and therefore already scientists.

Several good books have come out in the last decade on the importance of learning in nature. Two that harmonize with this theme are: Children and Nature (Kahn and Kellert, 2002), Last Child in the Woods (Louv, 2005). Playing in nature is perhaps one of the oldest and still one of the best educational activities. Why? Full brain development. 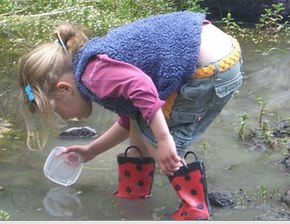 Theater, music, art, dance and physical education are also essential parts of a good curriculum for the same reason. Humans are storytelling artists with bodies and music in their souls. Education is about giving the human brain practice at using everything it’s got. It would be harmful not to help budding scientists blossom.

One recurring theme from all the breakthrough brain research of the last few decades is that there are very few meaningful activities that use only one part of the brain. This points to making sure that everything in the curriculum from writing to mathematics to science to music is taught so as to activate and utilize as many parts of the brain as possible.

All of today’s challenges will be handled by the same fundamental wiring that our ancestors’ brains had. Our musical brains, for instance, are built on the wiring they had when their chief function was to distinguish, categorize, remember, recognize and replicate the sounds of other creatures from birds to members of their tribe and family. When confronted with a modern mathematical problem, our brains use not only the sequential functions for linear processing, but also the wiring that helped our ancestors instantly estimate the size of a herd.  All activity that uses curiosity, inquiry, imagination, problem solving, and emotional intelligence is important in building a stronger brain which in turn is necessary for doing well on standardized tests.

Each academic ability (from filling in the right bubble to writing a short story to investigating a hypothesis) rests on a complex web of knowledge stored in different locations all over the brain. Education is a process of sophisticating each location and building strong links between these locations. To be good at mathematics a child needs to spend hours practicing arithmetic problems, but she also needs to spend hours drawing pictures, arguing with friends, building play houses, playing music or just plain playing on the dance floor, on the playing field, and in the garden. 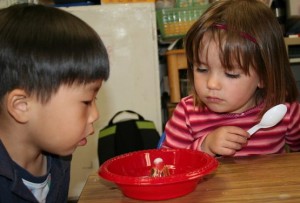 But all this leaves out the most critical strand of a good educational fabric: our purpose. The aim of education should not be any kind of success, but the ability to keep facing up to challenges especially in the face of failure. Brain research can remind us that when faced with a challenge, we want to be able to use all the resources packed in that amazing three pounds of goo humming there behind our eyes.