You can tell a good school from a bad one within minutes of walking in the door. All the humans are learning, and no one is making them. Everyone is taking responsibility.

Last June I walked through the gate in a chain-link fence that enclosed a mottled asphalt parking lot/playground and approached a steel door in a one-story brick building. A sign above the door read: Academy for Global Citizenship.

Buzzed in, I was immediately greeted by one of two busy people who escorted me down the hallway to the director’s office. I waited in the hallway so I could see what was going on.

Hearing a man’s voice say: “Ok, now, I am giving each team two cones. Who will be responsible for the cones?” I looked into the multipurpose room and saw third graders sitting at the lunch tables in groups in five groups of five; half of them had their hands in the air.

There was no feeling of control—only responsibility. The teacher was doing his job and the students were doing theirs. The feeling of cooperation between teacher and students was palpable—the social contract obvious: “You teach; we learn; it’s all good.”

I looked around to see a young woman in her twenties coming at me rapidly with her hand out. “Hi, I’m Sarah Elizabeth,” she said.

Sarah Elizabeth Ippel graduated from Eisenhower High School in Decatur, Illinois, in 1998, Cambridge University in 2002 with a master of philosophy degree in social and political science, and in 2005 at the age of 23 applied to start a charter school. Three years of disappointments, setbacks and successes later, AGC opened in 2008 and now serves 250 inner city kids in k to 4 with one grade being added each year. 81% of the students are low-income and 90% are minority.

“Sarah Elizabeth, you have a great school here!” I said.

“Thank you, Let me show you around.”

“Would you mind if we follow that class onto the playground. I would like to watch them a little longer.”

“Of course,” she said, and we went out into the Chicago sunshine.

The 25 third graders were already lined up behind one set of five cones and the second set was on its way to the other end of the blacktop in the care of teammates to be set up.

When they were ready the teacher gave one last instruction: “You are responsible for your cones. If one runner knocks over a cone, the next person has to set it back up again.

Sure enough, every time a runner knocked over a cone, the next teammate set it back up again and sped back to his team. When the race was over the teacher complimented by name the three runners who had stopped to reset their cones.

After the second race there was a dispute about some unfairness. Rather than “resolve it,” the teacher presided over a short conversation in which one child admitted he had made a mistake and the teacher began introducing the next activity. 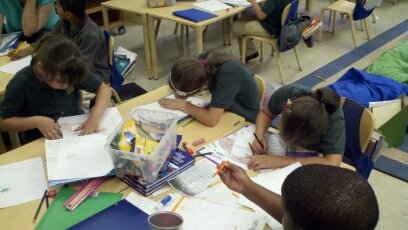 It was June 24, Friday before the last week of school. Most other children in Illinois are out of school; yet everywhere I went in the building, the children were all learning and lit from within. In a first grade room all 25 students and the assistant teacher were busy on a variety of different projects, and the teacher wasn’t even there. In fact as we left the room Sarah Elizabeth introduced me to the teacher, who was on her way back from the resource room loaded with some materials. She didn’t even need to look in the open door to see if everyone was busy. She just talked with us for a few minutes explaining how she creates a classroom culture where the children own their own learning.

The feeling in the third grade room next door was the same. All 25 students were working on the books they were polishing up for “publishing.” One boy came over to the executive director to show her his book. Another girl came up to me, took me across the room to where she was working, 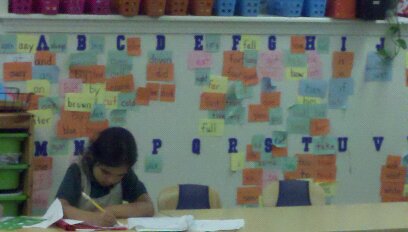 and read me her story in all its brilliantly creative detail about her daughter Grisly Bear. I was impressed by the high quality of all the writing in the room.

The whole school hummed like that, and the adults were free to talk with me because the students were learning on their own. I observed no challenges to authority because everyone’s business is to build authority in children. 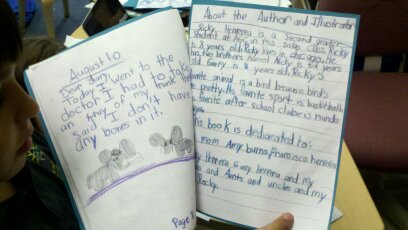 Yesterday, I had a cup of coffee with Sarah Elizabeth’s mother Linda, who still lives in Decatur.

“Willful? Let me tell you. My son was easy. He was so easy-going it made me feel like a great mother. Sarah Elizabeth was a challenge. She was so willful. One day with her on my hip I went into the closet to find her a dress. She was one-year-old. I reached for a dress, and she said, ‘No.’ Then I touched another one. ‘No.’ Then another. ‘No.’ Then she said: ‘Ziss one,’ pointing to a white sailor dress. Like I say, she was one.”

Despite the fact that raising Sarah Elizabeth was a bewildering challenge, Linda is justifiably proud of her daughter who is changing the lives of hundreds of underserved children in Chicago.

When I asked Sarah Elizabeth if she has any advice for parents of willful children, she said, “Embrace your child’s tenacity. Empower them to channel their determination by providing a safe framework for making choices.

“My parents did a wonderful job of balancing the necessity of structure while supporting my autonomy. Rather than constraining my resolute tendencies,” she rolled her eyes and smiled, “they intentionally facilitated the direction of my belly-full-of-fire toward meaningful pursuits. They absolutely contributed to this journey of launching the Academy for Global Citizenship.”

Having been responsible for the education a quite a few willful children I would say S.E. is onto something. If parents can see the child’s strong will and decisiveness as leadership ability, and take joy in nurturing that ability a parent can partner up with the child’s genius, not only assisting them on their journey, but teaching them the skills they will need to confront conflict and disappointment.

If you are looking for advice about the raising a willful child, I would add one thing. Be playful, and don’t be afraid to say “No.” Fun and firmness are key elements of “structure.”

8 thoughts on “How a Willful Child Can Become a Game Changing Leader (Hint: Have Fun Saying “No.”)”