How to behave in public is something the students at St. Paul’s Episcopal School in Oakland, California, practice daily on their two-block walk to the park for lunch, recess and physical education. (Yes, it’s true. It doesn’t rain that much in California.) This hike to the park has been going on for years, and the students are well trained and in good habits.

Halfway on their journey the children pass a sidewalk café and, of course, are too engrossed in each other and their social dynamics to pay much attention to what goes on there. Yet one day there was something new. Over the vacation the owners had built a low wall with planters on top separating the sidewalk from the tables, and in each planter were white pebbles right at hand-height for a sixth-grader.

The teachers and administrators were on it immediately, of course, speaking to the students and meting out punishments to pupils who couldn’t resist pocketing pebbles. But none of this adult activity had any effect. Students could not resist the allure of the pebbles.

Sixth grade teacher Susan Porter decided that it would be a good activity for her class to pick up pebbles. But Susan is the kind of teacher who never wants to waste a teachable moment. When the pebbles arrived back in class, and the students were all seated at their tables-of-four Susan said: “As you know, we have a problem with kids taking the pebbles from the café. I don’t think they are trying to be mean, but maybe they don’t understand the situation fully.  So my question for you to figure out today is: how long will it take for the pebbles in the planters to be all gone? What should we do first to solve this problem?”

Frieda said, ”First, let’s find out how many pebbles there were on the sidewalk.” Since that was obviously a good idea, each table of students counted how many they had found, and the numbers were written on the white board and added up.

“Now we have to measure the volume of the planters at the restaurant,” said Will, to which Susan replied, “Well, we have some time before you have to go to music, so let’s go now,” and off they went to the restaurant armed with meter sticks and rulers to measure the planters. Back in class they calculated those volumes, and got to work on their estimates. Not all the tables came up with the same answer, but it didn’t take long for them to resolve their differences. 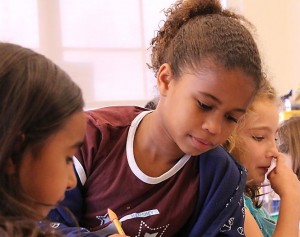 “We should tell the school,” said Thomas, and there was immediate agreement on that. They voted on who their representative should be. Although Colin was elected, the students decided that runner-up Mikaela, should go with him. (Twelve-year-olds mostly do everything in pairs.)

Each student wrote a draft of what they thought the speech to the eighth graders should say and handed their drafts in to Colin and Mikaela for their consideration.

(Shauna finished her message early and then wrote a different one to the kindergartners, because “kindergartners should be spoken to differently.” But when she presented her idea to the class, they said they liked her speech, but there was general consensus that kindergartners were probably not part of the problem, and it would be counter productive to talk to them about it at all.)

They made appointments to speak to the older classes and did so the next day.

The trail of pebbles never reappeared.