Responding by email to my article last week on children’s natural inclination toward empathy Allan, grandfather of Elise, wrote:

Having just spent five days with a 3 ½-year-old, I can reaffirm everything you say in this.

While her mom was working nearby, Elise and I had a wonderful pretend game where she was the proprietor of an ice cream shop and I was the customer.   She stood on the other side of a table and served me.   Unfortunately she only stocked chocolate, vanilla and strawberry, so just to stretch her imagination a bit (after enjoying a chocolate cone), I started asking for flavors she didn’t have.

“Do you have any jamocha almond fudge?”

“No, only chocolate, vanilla and strawberry!”

“No!  I told you, just chocolate, vanilla and strawberry.”

This went on for maybe 8 more uncommon flavors.  Then I asked:

“Do you have any birdseed ice cream, Elise?”

“What?  There’s no such thing as birdseed ice cream.”

That led to an interesting discussion of whether birds can eat ice cream.

I guess the context of this story is not so much about building empathy as reaffirming kids’ imagination, meeting them where they are, and stretching them out of their intellectual comfort zones.

One of my favorite “bits” with toddlers is watching them holding say, a brown bear toy and saying, “Can I have that green giraffe?” That not only makes toddlers reinforce what they already know, but confront authority in a safe way when the authority figure is doing something obviously stupid.

And I don’t correct kids’ grammar mistakes as they’re struggling to learn a crazy language like English. I just use the terms correctly myself and trust that they will pick it up because, after all, they do want to speak correctly.

Children are better stewards of their reality-testing-mechanism than anyone else. In fact, come to think of it, consider the arrogance of adults who think they can do a better job of building their children’s brain than the children themselves.

Allan’s thoughts go to the core of raising children: Do we treat them as if we, the culture bearers, need to instruct them in order for them to become acculturated, or as if their education is one continuous self-directed drive to map reality onto their brain? 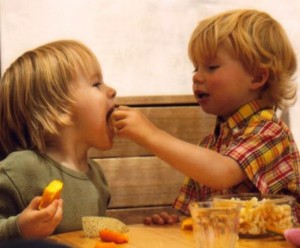 Parents usually get it right during the first year or so. They don’t try to teach their children so much as interact with them and have fun. When their baby first says, “Mama,” they don’t say, “No, no. That’s ‘Mommy.’” They bubble over with delight and shriek, “She said my name!” Parents instinctively know that children will get the words right by copying. All a parent has to do is be his delightful, loving self and the child will learn to speak.

By the age of four children know the past tenses of 10,000 verbs even though they may only have heard a couple hundred. You discover this is true when they come up with words like: “goed, or bringed, or eated.” Their path toward adulthood is paved with thousands of mistakes. Only adults act like there is such a thing as a mistake-free zone. (Adults ought to know better.)

The core competency of all educators—parents, grandparents and teachers, alike—is to know how to “Treat children as if they know what they are doing.”