Talk So Your Kids Will Listen

“I listen to my father because I have found that he tells me things that turn out to be true,” said Allison (18 year old high school senior) as I drove her home from the basketball game the Wednesday after the Saturday night party where some of her classmates got into trouble, getting drunk and trashing the house of a classmate. “Like ‘Never go out without money,’ he says.”

I felt like saying: “That’s interesting. Your parents think you never listen. It drives them crazy that you get mad at them every time they try to tell you something, and that you insist on doing it your own way. Yesterday, your mother even said to me with a sigh ‘It’s as if she is bound and determined to make mistakes.’” But I just listened.

(Doesn’t she know her parents and I are friends? Ah, yes. She does, doesn’t she. Hmmmmm.)

She continued: “I wish I could talk to the parents of my friends and tell them how to talk to their kids. I wish they would tell them things like ‘Never go out without money.’ There we are at Starbucks and they’re all, ‘Allison, can you pay for this? I didn’t bring any money,’ and I go, ‘Sure.’ But it get’s annoying. They do pay me back, but it’s annoying. Parents ought to be careful what they tell their kids, so that when they give them advice, the kids will listen. What those kids did to that house was gross.”

“But you don’t always do what your father tells you, do you?” I asked.

“No, but when he talks, I do listen. Sure, it makes me mad when he tells me to get off 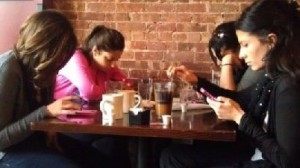 Facebook and start doing my homework, but I know he is telling me the right thing. That’s the point. I know it is the right thing for him to tell me. It makes him mad when I don’t do it right away, but that’s the way it’s supposed to be between parents and their teenagers. I know he’s right. I just have to do it myself.

“The point is my Dad is like an authority. When he speaks I listen.”

2)    The measure of your authority is: when you speak, they listen.

3)    By the time the child is a teenager it is not about obedience anymore.

4)    To be an authority, give them reliable messages.

5)    You won’t know you were successful until they come to you for advice when they are older or when the chips are down, and their peers’ advice proves unreliable.

What is your strategy for being an authority for your children?

18 thoughts on “Parental Authority: Do You Have It?”