If parents understand the “terrible twos” as a developmental stage for parents as well as children, they can take parenting to the next level and keep supporting their children’s drive for self-determination.

1. At 22 months my grandson, Musa, discovered the word “No” and has suddenly become (in his mother’s words) “very Dr-Jeckel-and-Mr-Hyde.”

But this was not always the case. When I was camping with him and his family two months ago, I saw a twenty-month-old who was driven to please. His greatest delight was to make others happy.

As the four of us were sitting down to eat one evening, I said (just to see what would happen), “Musa, would you please go to the cooler, get out the jug of cider and bring it to the table?”

Musa paused in his eating for a split second, got down from his chair, walked to the cooler, opened it, got out the half-gallon jug of cider, and brought it to me.

Then, he went back to the cooler and got out a quart of milk and brought it to me.

“Does anyone want milk?” I asked.

The others said no; so I said: “No thank you, Musa. Would you please put it back?”

He did, then came back to his chair and went back to eating.

Moral #1: Act as if kids want to be helpful, and they will prove you right.

2. Then one month ago he discovered the word, “No.” His mother asked him to bring her a book from the table, and he got a little gleam in his eye and said, “No.”

“I could see the wheels turning in his head,” she told me, “as he made the discovery that doing or not doing was his choice. He was obviously thrilled with this discovery. In the month since then, not a day goes by that he doesn’t say ‘No’ at least once.”

It is very important that parents go through this stage in their relationship with their children without getting stuck in authority battles. It’s tricky business, but if we remember that our goal is to continue to increase parental authority in such a way that it strengthens the authority of the child we will be okay. (Moral #2 ) 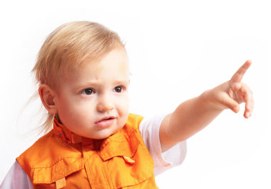 3. We all know examples of parental authority gone awry—especially those parents who simply abdicate their authority and don’t set limits for their children. However, it can be equally bad for children and for our relationship with them, if we allow it to go the other way.

Arnie, for instance, turned in his homework inconsistently. At one conference Arnie’s mother reported that his father was merciless in pressuring Arnie to measure up to his standards. Indeed, his demands would put most “Tiger Moms” to shame.

We tried to address this in parent-teacher conferences, but he kept saying, “Arnie needs to be held to high standards.” Arnie’s father wouldn’t let up.

By eighth grade, Arnie had devised a strategy for not letting his father’s domineering nature interfere with his own education. He did the work, but didn’t turn it in. Moral #3 Children are resilient. They can transcend most bad parenting.

4. Paternal over-control was a problem for Illana, too. Her reaction was to disrupt class, which she did with increasing frequency until finally, in sixth grade she became a bully, and we had to expel her from school. In our final meeting her father said, “Listen, don’t feel bad. We understand. She is like that at home, too. But maybe you can give us some counseling. Is it like Illana just wants to do her own thing?”

The father’s question gave me an insight. I said, “No, it is as if she doesn’t have her own thing. Her only ‘thing’ is to find out what the adult authority wants and to thwart it.”

Moral # 4 Self-determination is the name of the game for all humans and around the age of two, as everyone knows, children’s need for autonomy becomes paramount. This drive to be in charge of their own action can be a problem for many parents, hence “The terrible two’s.” If parents understand the child’s drive for autonomy as desirable, and are willing to keep learning, they can keep supporting their self-determination.

6 thoughts on “The Terrible Twos: Children’s Self-Determination and Four Lessons for Parents”