bleachers” after gym class for what Ms. Tough, the P.E. teacher, felt was some ‘inappropriate’ behavior. Then, it seems, she forgot they were there.  Recess came and went, and still they sat and waited as they were told. But after 20 minutes or so, Brian decided this had gone on long enough, went to the bathroom, and slipped out the back door of the gym unnoticed.

Brian’s homeroom teacher came looking for the recalcitrant students, when they didn’t come back to class and found them on the bleachers, minus Brian.

When a search of the locker rooms and other obvious places didn’t recover him, Brian’s mother was called, and the adult drama ensued: 100 police, 2 helicopters, neighbors, relatives, police questions about family strife and impending divorce and so on. A neighbor came to stay at the house just in case he should miraculously arrive.

45 minutes of searching, questioning and nail-biting ended when the neighbor heard the back door open. Brian, age six, had walked home—25 blocks—3.5 miles—a route that, till then, he had only experienced by looking out the car window.

By the time the parents got home Brian was abashed, feeling guilty and acting shy.  When asked what had happened, he told an accurate story about the P.E. teacher, the behavior, and the punishment, concluding with, “It wasn’t fair.”  When asked why he ran away from school, he said, “I didn’t run away, I went home.”

From an adult point of view, of course, there are a lot of problems with Brian’s behavior. We all prefer, for instance, that he would “use his words,” and it wouldn’t take five educators five minutes to come up with a list of ten better ways for Brian to have handled himself in this situation. Adults are excellent at noticing bad behavior, naming it, telling kids what they should have done and prescribing what they should do to make amends. This adult ritual is good and necessary.

However, by the time kids are six they have come to trust actions over words. One might have to agree that Brian’s actions were an eloquent response to certain other inappropriate behavior. One could say he spoke with his feet.

These days Brian, at age 40, is the leader of a medical team in Mattar, Ethiopia, and this May, Brian’s mother emailed me an update on Brian, attaching the following mother’s day email from him to her:

Hello! I made it to Mattar. And, apparently I brought the rain with me. When I arrived, it was blazing hot and hadn’t rained in months. About 2 hours later, the skies opened up and it rained. Huge, roaring Africa rain.  So, I guess the rainy season starts right now. I’ve got my own little tukul to live in, with a thatched roof and dirt floor, and a bed that was made by a sadist. My first job will be to do something about that. There are birds of every description, from tiny jewel colored ones that flash past your vision to leggy marabou storks wandering through the compound towards the river. Huge fish eagles occupy the trees near the river, waiting for the fish (which are giant) to bubble up. Lots of gazelle type things out away from town

The team is friendly and varied, with people from all over. Italy, Austria, France, USA… and of course Ethiopia. There is lots to do, with three compounds. Lots of things to break.

The national staff is very skilled, and does a great job. Most of what I’ll do is manage the staff and the occasional more technical fix… although we’ll see…

Tomorrow we walk across the border into the South Sudan to meet with the Belgian team.

I hope spring is springing well for you!

(Though, today, he is obviously no slouch with words, Brian is apparently still speaking with his feet.)

In her email to me Brian’s mother wrote her version of Brian’s First Journey, ending with:

It certainly taught him two things:

one, he could find his way anywhere, and

The memory still puts a cold hand on my heart.

What is Brian’s genius? (Watch out. It’s a trick question unless you have read The Genius in Children: Encouraging Character, Curiosity and Creativity in Children.)

Transcending strengths and weaknesses, genius  guides us in the expression of our character and the discovery of our calling. 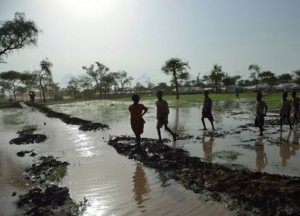 4 thoughts on “What is Genius? Part 2: Brian’s First Journey”