This spring Susan Porter’s sixth grade class found two bags of treasure in Lake Merritt, a140-acre tidal lagoon in downtown Oakland, California. What surprised the reporters (though not me and Susan) was that the kids were not at all selfish about it. They were happy simply to have made a difference. (Later they were happy to have made it on TV). These students are examples of what kids look like when they are treated as if they are inherently altruistic rather than inherently selfish. 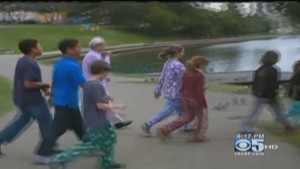 All the students at St. Paul’s Episcopal School in Oakland engage in service learning projects from kindergarten through eighth grade. The sixth grade has taken on Lake Merritt. As Susan put it: “The city uses Lake Merritt to promote itself but can’t keep it clean without us.” Cleaning up the lake over the years has led sixth graders to map its watershed, study its storm drains, investigate its hydrology and ponder its politics.

One day, for instance, the kids noticed dirty bubbles around the fountains. They tracked it down and figured out that some local businesses were dumping mop water into drains that lead to the storm drains that dump into the lake. The kids went door to door in the commercial district on Grand and Lakeshore Avenues talking about the problem and found out who was doing it. They reported it to the city and talked with the owners who changed their practices.

One day in April became a BIG DAY for them when they discovered two bags full of rings, antique pocket watches, gold medallions and silver candlesticks. The booty, apparently stolen, was so heavy that it couldn’t be fished out of the brackish water with a simple net. (Watch the CBS video report.)

“The students had hooked themselves a mystery,” said the reporter for the L.A. Times. Leah Winer, 11, spotted the submerged sacks first.

“I was going to dump them out,” Leah said, “but Ms. Porter said we might damage it. So I pushed the sides open and there were all these jewels. Not technically jewels, but gold. And I started screaming, ‘Oh, my gosh, there’s gold in here!’ ”

Others took up the OMG chorus. A passerby lent the group his cellphone to call the police, as they sifted through the loot awe-struck. Theories about who might have tossed the bags in the lake were kicked around in class. Thieves was a class favorite. “Maybe he saw a police car and didn’t want to get caught.”

“Or maybe it was a drop spot. One person left it, and another would pick it up at, like, three, but we got there first.”

The students also worried about whoever might have owned the goods in the first place. “I was robbed a few years ago,” Leah said. “The burglars took my computer with years and years of photos on it. I wish I had it back. They took my allowance. I know what it’s like to lose something and really, really want it back.” 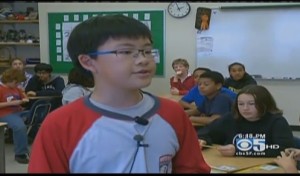 The success of service learning in motivating students to pour themselves into school and their academics is now widely understood by educators with many exciting examples from coast to coast. Many parents, teachers and students at the school think one of the top reasons the test scores are so high is that each child feels they matter. It is certainly one of the reasons they love to go to school every day.

Unfortunately, under the name of “community service” it is still more generally understood as a means of teaching “values” and altruism to kids who otherwise are naturally selfish. That many adults are surprised at the altruism of children should be bothersome to us. It is the most natural thing in the world for humans to want to make a difference to others, and we are more likely to get that behavior from kids if we expect it.

The sixth grade’s latest activity is walking down Grand Avenue photographing and counting cigarette butts in an effort to convince the city to install a pilot project of some ashtrays at key places so they won’t be litter. (Did you know that cigarette butts are a large part of the litter that goes into runoff worldwide? I didn’t.) Last week the kids went to the Oakland Public Works Water Quality Committee to speak about their findings. They were asked to come back and report again at another meeting in the spring. Who knows what treasure they will find this time, but one thing we do know is that they will find treasure inside themselves.

Children inherently want to be part of something larger than themselves.  They are much more open to instruction when they feel they are learning toward accomplishing something real.